by: Zack Budryk, The Hill via Nexstar Media Wire 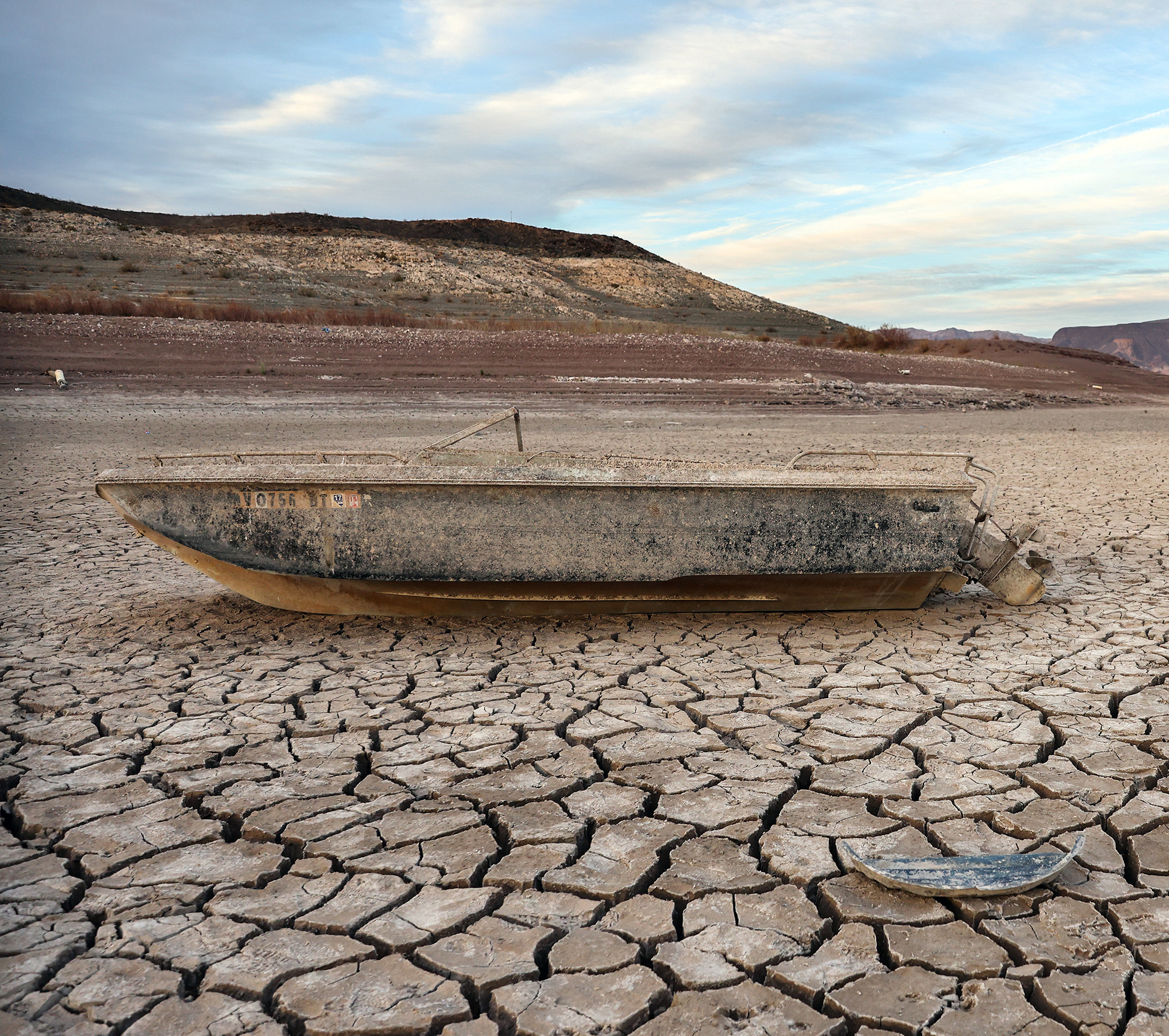 “The moment of truth
is here for everyone. …
We need to change fundamentally how we manage and use water.”

A formerly sunken boat rests on a now-dry section of lakebed at drought-stricken Lake Mead on May 10. (Photo by Mario Tama/Getty Images)

The American West is experiencing its driest period in human history, a megadrought that threatens health, agriculture and entire ways of life. DRIED UP is a series of stories examining the dire effects of the drought on the states most affected — as well as the solutions Americans are embracing.

Nowhere is the Southwest’s worst drought since the year 800 more evident than Lake Powell and Lake Mead, the pair of artificial Colorado River reservoirs whose plunging levels threaten major water and power sources for tens of millions of people.

Already, the region is being forced to adapt to the sweeping effects of climate change, and the lakes and their surrounding area are nearing an environmental point of no return.

The retreating waters have revealed everything from World War II-era boats to multiple sets of human remains, including one in a barrel, a morbid reminder of Las Vegas’s history of organized crime.

Lake Mead is projected to get down to 22 percent of its full capacity by year’s end, while Lake Powell is expected to drop to 27 percent, according to estimations from the federal Bureau of Reclamation. Both now sit at record lows.

In Lake Mead alone, the net water loss has worked out to more than 6 trillion gallons, according to data from the National Park Service.

Hoover Dam is already seeing reduced electricity production from Lake Mead’s shrinking size, and the reservoir is projected to fall to approximately 150 feet above “dead pool” status, or the point at which the levels are too low to flow downstream, endangering both power and drinking water.

“The moment of truth is here for everyone,” said Christopher Kuzdas, a senior water program manager with the Environmental Defense Fund. The issues, he added, are an “unmistakable signal that people — we need to change fundamentally how we manage and use water.”

The Colorado River’s vital importance to the West

The Colorado River Basin is in a unique position when it comes to drought: The river’s waters are governed by a century-old agreement among seven states, which allocates more water than actually exists in the river because it was based on data from one of the wettest decades in U.S. history.

The river, America’s sixth-longest, winds through Arizona, California, Colorado, Nevada, New Mexico, Utah and Wyoming, and its basin covers about 8 percent of the continental U.S. Approximately 80 percent of its waters eventually go to agriculture, but it also provides drinking water for 25 million people, and its hydroelectric dams produce an average of 8,478 gigawatt hours a year in power-generating capacity.

“Failure isn’t an option, because there is so much at stake here.”

Under the interstate usage compact, a new round of water cuts will kick in automatically on Jan. 1 for Arizona, Nevada, New Mexico and possibly California if water levels have not increased by year’s end.

For Lake Powell, specifically, the seven states reached an agreement in April to forfeit their water from the reservoir so that it can keep producing power. The federal government, meanwhile, plans to move about 162 billion gallons from the Flaming Gorge Reservoir into Lake Powell.

Fourth set of human remains discovered at Lake Mead since May

And if the states involved in the Colorado River compact can’t agree on a plan to reduce water use by 2 million to 4 million acre-feet by Monday, the federal government will step in to determine the cuts.

“Failure isn’t an option, because there is so much at stake here,” Kuzdas said.

Much of the water policy in the U.S., particularly in the West, was developed so long ago that the era’s different values and priorities made an eventual reckoning inevitable, Kuzdas said.

“We were already trending on this trajectory, but climate change is happening maybe 20 or 30 years sooner than it otherwise would have,” he said.

For residents, difficult choices may lie ahead

The western U.S. in general has already had to make numerous overhauls to how it manages water over the centuries and decades, said Jay Lund, a professor of civil and environmental engineering at the University of California at Davis.

“We’re going to have some very difficult philosophical, political, practical, economic decisions on how we want to manage these changing conditions,” he said.

Meanwhile, the West, like much of the U.S., is baking under more and more record-shattering, climate change-fueled heat waves. Between 2000 and 2021, the West saw average temperatures about 1.64 degrees Fahrenheit above the average through the second half of the 20th century.

A study published in the journal Nature Climate Change indicates the drought, which could persist until 2030, has been made approximately 40 percent worse by the effects of the warming planet.

Robert Glennon, a law and public policy professor at the University of Arizona, emphasized the importance of local solutions.

“We have tools in our toolkit capable of changing the direction that we’ve been moving,” Glennon said.

Active conservation measures, he told The Hill, “remain the fruit that’s easiest to pick.” He pointed to water conservation steps already taken by major western and southwestern cities including Phoenix, San Diego and Los Angeles. Those cities, he said, have managed to get their water use below that of the 1980s despite major population growth.

To some extent, however, Glennon said, meaningful conservation will also require a “cultural shift” around how Americans, those in the West particularly, think about water needs.

“I think we can back up and ask ourselves … why on Earth are we watering our lawns in the desert?” he said.

“I often get the question, ‘Can we fix it?’ … and the answer is, absolutely yes,” said Jonathan Deason, director of the Environmental and Energy Management Program at George Washington University’s School of Engineering and Applied Science. “We caused it and so humans can fix it. We will fix it. But how much pain will we go through before we do?”

State and local policymakers have pressed for active changes to address the drought as well. In a June hearing of the Senate Energy and Natural Resources Committee, John J. Entsminger, general manager of the Southern Nevada Water Authority, called on Congress to make “massive investments in agricultural efficiencies.” And Maurice Hall, vice president of climate resilient water systems for the Environmental Defense Fund, said the Bureau of Reclamation should have wide latitude to develop groundwater policies with states.

Beyond the Colorado River: Water crises lurk beneath the surface

Some of the challenges facing Lakes Mead and Powell are specific to the Colorado River basin due to the interstate agreement. But as unprecedented heat slams broad swathes of the country, the basin may be a preview of what it looks like for America to pivot to an adaptational approach to heat and drought.

“The Colorado River is getting the most attention recently, but the Central Valley in California has hideously overpumped its groundwater,” Glennon said. “The ground levels there have dropped by 30 to 40 feet — the whole surface of the Earth has dropped in response to excessive groundwater [depletion].”

Separately, he noted, the Ogallala Aquifer, which underlies much of the Great Plains states and parts of Texas, is projected to be 70 percent depleted over the next few decades, and the Supreme Court last year had to intervene in a water dispute between the states of Florida and Georgia, ruling against the Sunshine State’s claim that water overconsumption by Georgia is depleting Florida’s oyster fisheries.

The Lake Mead and Lake Powell crises are also coming at a major moment for federal climate policy — the White House, after nearly two years, appears poised to secure major climate legislation, which has cleared the Senate and is set for a vote in the Democratic-controlled House on Friday.

But if, as expected, Democrats lose their majority in one or both chambers in November’s midterm elections, much of the further work on climate reform will likely be limited to the state level.

But Glennon says in many ways, that’s already the case.

“Even if you had a vast, grand [climate change] mitigation policy at the federal level, you would still have to have tremendous amounts of state and federal activities in terms of climate change adaptation, because there’s just very little likelihood that mitigation alone get rid of the need for local adaptation,” he said.

SC officials: Now is time to prepare for Ian

SC officials: Now is time to prepare for Ian

4 injured in crash which closed I-85

SC officials say now is the time prepare ahead of …

4 injured in crash which closed I-85

Man robbed at gunpoint in Asheville

Adoption fees for pigs to be waived in Asheville